Featured image: Knocker and lock at the entrance to Castle Drogo.

Cogitation 16 Friday 20 April 2018   To build a castle, whether of sand or of granite, takes imagination.

To build a sandcastle takes a child’s unleashed imagination. sandy beach, water, a shovel, and a bucket.

To build a castle of granite takes an adult’s persistent imagination, a rocky spur above a valley, money, and an architect ready to do extensive revisions at the owners insistence.

This week we got a glimpse of the role imagination played in building, and now conserving, Castle Drogo in County Devon.

Julius Drewe had plenty of drive, money, and imagination to acquire land and build a castle in the years 1911-1930. Castle Drogo is considered to be the last castle built in England. It towers over the Teign Gorge, near Drewsteignton, in Dartmoor National Park.

Encouraged by a genealogist who suggested Drewe came from medieval Norman ancestry, the wealthy business founder returned to this Drogo ancestral land in Devon to build his country home and castle. The supposed medieval ancestry connection was with the family Drogo de Teigne.

Drewe hired leading architect Edwin Lutyens to design castle and gardens, a move that pitted the owner’s imagination, drive, and money in a see-saw tension with the architect’s professional eye.

Drewe lived 1856-1931. In 1974 the family transferred the 3-story Castle Drogo and 450 acres of land to The National Trust. The building, to me, appears worthy of the 14 million Pounds Sterling The National Trust will have invested in an eight-year conservation project, to be finished by the end of 2018.

Drogo, in a 20th century way, is a castle, the real thing, product of one person’s dreams, reduced somewhat from the grand original plan, yet a fitting build in a grand location, shaped by a leading architect and garden designers of the day, as by Julius Drewe.

What neither Drewe nor Lutyens quite grasped, though, was that the new early 20th century flat roofing materials would spring a leak almost from the get-go.  Installing a leak-proof roof is one part of the massive conservation project.

Conservation of the grand complex of buildings and gardens, assimilated into a rugged moorland landscape, really is an investment that will catch people’s imaginations for years to come. 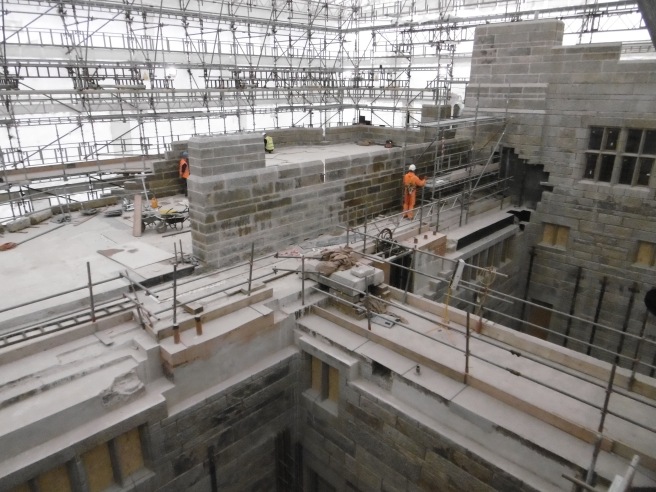 Imagine a little. Imagine a lot. Some imaginings may have the life-span of a sandcastle, or of a granite castle. Either one can have enough lasting-power to inspire generations. Imagine that!

Brief recap of the week

3 thoughts on “What it takes to build a castle”