Featured image caption: Women at Prairie Street Mennonite Church stitched a quilt for the Michiana Mennonite Relief Sale, 9/24. They named it Magenta Kaleidoscope Wonder. It’s a wonderful gift for the relief, development and peacebuilding work of MCC. It sold to a member of our church for $400. The Prairie Street children’s My Coins Count offerings for MCCs clean water projects totaled $217.10. Bravo all! God gives the increase and blessing over all.

Mistrust, anger, rant, sanctioning of violence, tribalism, authoritarianism, pessimism, fear, hankering for a past that never really was just like we remember it. What’s going on?

My 2 cents worth on the state of our times

We’ve lived through a hundred years of modernism. It was a century of constant change, go-getter-ism progress fueled by rationality and logic. We created change in transportation (the horseless carriage), architecture (the sky scraper), medicine (vaccines), cities (the suburbs), one-to-one communication (telephone operators–the party-line you loved to hate), technology (the cathode ray and silicon chip). What happened next?

From the modern era we morphed into the post-modern era, a time of even more secularization. We became less sure that the answer to our ultimate concern about the purpose and meaning of life resides in modern and pre-modern worldviews.  For post-modernism, one source says, “Constant change becomes the status quo and progress obsolete.” Less is certain, there’s more of any-thing-goes, more questions than answers it seems. Yet we place ourselves in peril if we out-of-hand dismiss what’s right in front of our eyes every day.

I’m treading in territory where I know I’m totally an amateur explorer.

It’s a compelling pursuit, nonetheless, but I’m as apt to get on a side path as on the main trail. Even my metaphor, “2 cents worth” may mean nothing to great-nephews and -nieces in Canada who know only the nickel as the lowest denominated coin. The Canadian Mint stopped issuing the one-cent piece in 2013. Cash transactions are now rounded up or down to the nearest nickel, but credit card and cheque payments still record to the penny. So,  I could offer a “rounded cents worth,” but I doubt that would have the same currency.

Scottish writer, broadcaster and cleric Richard Holloway, in Doubts and Loves: What’s Left of Christianity  (Canongate, 2001), said “The dominant characteristic of what is called post-modernity is the absence of agreement on the core meanings and values that undergird the human experience.”

I’ve more to learn about Holloway’s worldview. He resigned in 2000 as bishop of Edinburgh in the Scottish Episcopal church. He has a strong faith in humanity, calling himself an “after-religionist.” Still, his analysis of the world we live in bears examination. It’s like the new possibilities of pluralism, multiculturalism, equal treatment of women and sexual and ethnic minorities opened like a flower during the life span of many of us.

As this affects the future shape of churches, Holloway wrote, “The big question for the churches is whether they are so identified with the values of a previous culture that they are incapable of adapting to its successor. The culture wars of North America, in which Christianity is identified not only with a particular version of gender relationships, but with a hatred of sexual minorities and contemporary human freedoms, is a  prospect that dismays Christians who are at ease in the new culture of post-modernity.”

Again I say, I’m not even scratching the surface of the worlds of modernity and post-modernity. We’re living in the latter even as we probably experience it as an overlap with the former. My purpose is to open further inquiry, dialogue, to get a better bearing on what’s happening in our religious, political, and social worlds.

The current mood of many to church and political realties is to pine for a former time that is obsolete, past. One dynamic that’s afoot in congregations opting to leave Mennonite Church USA and in the current presidential campaign is a disquiet with the post-modern world we live in.

For all the good we’ve inherited in the United States, who would want to return to the segregation of racial and sexual minorities, subjugation of women or at best narrow limitation of gender roles for women, and patriarchalism? We have new worlds to explore, new ways to achieve equality, new ways to work for peace, new ways to live in harmony with and in obedience to God’s will for people and for creation. God help me/us.

Intermission. With a topic as huge and fluid as modernity and post-modernity, we need a dose of levity and down-to-earth perspective such as shown in the MUTTS comic strip of 22 September 2016. The first frame shows Earl, the dog, and Mooch, the cat, getting bonked on the head by falling acorns. Frame two shows three men, faces down, BONK, BONK, BONK. Third frame: “Ahh–The bounty of autumn,” says one squirrel to another.

Surfing lessons anyone? From an online piece by Hilary White: Don’t Waste Any More Time–Experience These Amazing Adventures Right Now  (8/20/16) I quote a few: “Experience snow. Bake something from scratch. Visit the Grand Canyon. Drive a convertible. Take a train trip. Attend a ballet, symphony or opera. Perform or speak on stage. Sail a boat. Go to the Zoo. Go skinny dipping. Watch the sun rise/set. Take a surfing lesson. Spend a day without technology.  Climb a mountain. Read an entire book in one day.” Wow, I’ve got only one of those adventures to go, but I doubt I’ll take up surfing.

Listen up. Here’s a shake-your-head-and-bones sign of the times. One of the 10 hottest new car features for 2017 is in the bed of the Honda Ridgeline truck: “The revamped Ridgeline midsize pickup truck offers a 240-watt audio system with six weatherproof audio ‘exciters’ that essentially turn the cargo bed into a giant resonant speaker for playing any of the infotainment system’s available sources.” Next thing will be a self-driving truck that lets you dance in the truck bed all the way to the grocery store, ballet, concert, or surfing lesson.

Creatures I spied this week, sadly no turtle sightings 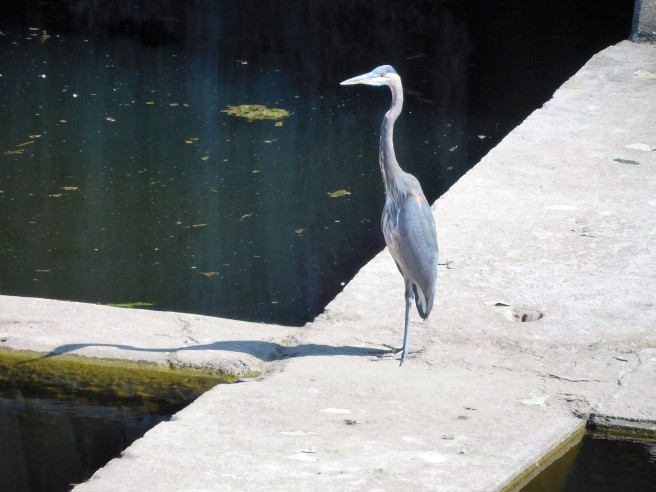 On the Riverwalk under the Elkhart Avenue bridge

Worth the effort. Dialogue, noncoercive dialogue is possible. It comes from deep down in who we are as human beings who want the best for the insiders and outsiders in our lives. Not? Listening, responding, taking into consideration even people with whom we find it hard to have a civil exchange, surely we can be more creative than falling into silence, avoidance, even coming to loggerheads. It’s about finding common ground, avoiding a mud bath, getting a better grip on the past and future we’re living in in the present.

Insight into the Christian’s DNA. When I finish reading Alan Kreider’s book, The Patient Ferment of the Early Church: The Improbable Rise of Christianity in the Roman Empire (Baker Books, 2016), I know I’ll have struck gold on what it means for Christians to live out the nonviolent patience and winsome witness of the New Testament church. Believers in the early church, under the heavy rule of the Romans, faithfully and patiently followed the way of Jesus that brought new meaning to their lives and to the lives of those around them. Later.

A happy new week to you. – John

One thought on “The world makes no sense, or does it?”