Summer Stage #7, Sunday 10 July–Who doesn’t love a weeded garden or flower bed? Sure, there’ll be the odd person who’ll speak up for all plants, including weeds, and that’s good. But that’s  not the most popular position. No weeding would spell chaos, right?

To hoe or not to hoe, now that’s the question

I’m not the only one to find the thistle bloom attractive. 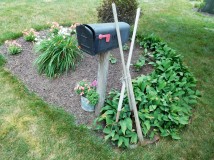 To hoe or not to hoe, now that that’s a question, it’s one to contemplate. 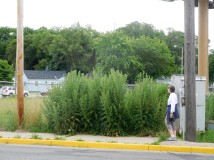 On some of our walks we pass this thistle patch at the Elkhart Avenue train crossing. Not even a train whistle seems to stop it growing.

This once tended garden has gone all to seed. What does one make of lush natural growth?

This cottage family wants no postal delivery, thanks to the mess-age of nature’s growth.

Elkhart City’s quilt garden is one of many throughout the county that eschews weeds. O.K., weeds have their place, just not in a quilt garden.

Let them grow, or not?

John Coffman, long-time missionary in London, UK, maintained a weed is a proper plant that’s just grew in the wrong place if it was in his garden. Thanks to friend Ellie Kreider for that reflection from the past.

Gary Harder, retired Canadian pastor, went a step further. He quotes a friend, Paul, a biologist and environmentalist, on weeds. All that weeds are, according to Paul, “is native species that thrive on native soil, often more useful than the stuff we try to replace them with. There is no such thing as weeds. Let them grow.”

Paul went on, “People want neatness and order in their lives and in their gardens and in the church.  But nature thrives on chaos (bold added). Nature thrives on diversity and chaos. Humans want only order and monoculture. How boring can you get? And look what we do in the church? We want a pure church where we kick out sinners or at least people with different sins than our own. We try to nail everything down in creeds and confessions and eliminate all weeds. It doesn’t work. There’s no interesting life then. Why can’t we learn from nature?”

Harder draws out fitting applications on the spectrum of weeds in his autobiography, Dancing Through Thistles in Bare Feet: A Pastoral Journey (Herald Press, 2008). It’s an engaging, prodding, God-present-in-unexpected-ways book.  In a cover blurb David Augsburger says that Harder writes from “the servant stance that sees the good and brings out the best in others. And when things are going wrong, God appears.”

I reread the book–on loan from our sister-in-law Vivian–after a week of weeding and mulching flower beds. I also uncovered a grassed-over walkway alongside the house that I had put down a good number of years ago with broken pieces of our driveway.  Brother Mark and  nephews Nathan and Mike put their collective skills to work to replace our driveway and entry steps with pavers. What a happy memory and enduring display of quality work. Gratitude galore lives on.

So I weeded, took out and replanted root-bound irises, planted a hydrangea where the irises had been, replanted mint in buckets, mulched, trimmed the hedge, created a small rock garden, cleaned the deck, and now, with coffee in hand, am glad for the balance Gary Harder, and others, bring to all that goes smoothly and not-so-smoothly in our lives.

One of my favorite images of church is of Holy Spirit hovering over chaos. God is present. God surprises us in God’s healing work at many twists and turns in our lives, even creating blessings out of chaos and the natural world and in our life together.

Last Sunday I did Children’s Time at church, focusing on the fruitfulness of gardens and on God surrounding us with people to help us grow. I gave each child a cutout, the top cut with a pinking shears grass-like cut on the top, of “Your bodies shall flourish like the grass” Isaiah 66:14b. Their activity was to color the grass-like part green. I could have said the children will get taller, mature, and flourish like weeds, an appropriate image, but Isaiah said it differently. I ended with this prayer, “Thank you, God, for the good food you make grow for these children to grow and flourish.”

I’m grateful for the Milkweed planted at church as food for Monarch butterflies.

To not weed, though, was not a question of the week past

From a series, “Beautiful Photos Throughout History That Will Leave You Speechless,” by Mark Beck (Taboola AmericanUpbeat, 4 April 2016), I draw from three photos and captions.

It was total chaos the first morning in 1967 after  Sweden changed from driving on the left to driving on the right. Cars and trucks in the picture are in a real jumble.  The official name for the day was Hoegentrafikomlaggningen.

Also in the 1967 Boston Marathon, organizers attempted to stop (weed out) Kathrine Switzer, No 281, from running. They weren’t successful. Switzer became the first woman to run in the Boston Marathon. The surprising, healing, enduring work of God rose to the surface that day.

In 1936, Kentucky, held the last public execution in the United States. A throng of onlookers, thousands strong, turned out to watch the event. For all the strides we’ve made, the country still relies on forms of justice that do not heal. God have mercy.

In the know about Noah

You’ve read about the 510-foot-long, more than $100 million Noah’s Ark attraction that opened Thursday in Williamstown, Kentucky, near Cincinnati, Ohio.  The ministry that built it expects up to two million visitors in the first year. It will be a mixed educational experience. The ministry, Answers in Genesis, maintains creation is 6,000 years old; scientists say dinosaurs (included with other animal replicas on the ark)  died out about 65 million years before humans appeared. One trusts that lessons of the Ark will prevail over the vast gap in biblical interpretation. Again, may God’s surprise come as an olive branch. Leroy Troyer served as architect and two Amish brothers from Middlebury headed up the building crew.

Have an amazing week, ponder the paradox of  being ruthless and easy on weeds, enjoy the fruits of your labor, and let the chaos of life play its part. -John

4 thoughts on “Chaos plays its part”