Cornwall Cogitation #8, Sunday 27.03.2016–Café moulu avec value garantie (coffee with value, guaranteed aroma). We used up our package of cafetiere-ready Café Noire. Not to worry, we had a Fairtrade Cafédirect at the ready. Here’s a mug raised to you!

A week of endings

James Martin’s cooking show, “Saturday KItchen Live,” ended on Saturday, after five and a half years on BBC1. “Thank you for watching,” he said, “And thank you for being you.” Two of his projects were raising cost-effective food standards in schools and hospitals.

Wood Green Mennonite Church in London closed, with membership at 12. The  church plans to continue as an online body. A Catholic friend here quipped, “Jesus did pretty well with twelve.” Who knows, Wood Green may pioneer a new reality for small groups of disciples.

The Independent published its last print edition on Saturday (26.03), it’s front page blazoned: Stop Press. For 30 years the paper has offered intelligent, non-partisan news and views that engaged readers. Engaging readers at a deep level will remain the paper’s objective as it goes totally digital. Good luck, Indie, on your (by fee) service to readers online.

We ended Friday with a first. The evening bus home from Penzance ran out of petrol at the stop at St Erth. More than 30 minutes later a service truck had brought fuel and we were able to complete our journey. Interestingly, these double-decker buses have no fuel gauge. Somebody back at the garage had failed to fill the tank for the day. That bus gets four miles to the gallon.

On Easter Sunday we took part in a glorious service celebrating Jesus’ resurrection. “Alleluia! Christ is Risen!” we said at the start of the service. In the post communion prayer we prayed, “grant us so to die daily to sin, that we may evermore live with him. . . .” In memory of our parents we covered the cost of two lilies. Thanks be to God. Alleluia! Alleluia! 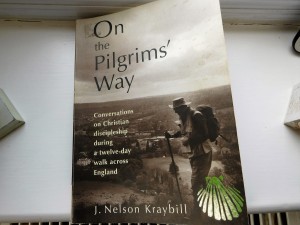 In chapter six, “Invest for the Kingdom,” of On the Pilgrim’s’ Way, Nelson Kraybill recounts a day’s walk in conversation with Noel Moules, known as the Shalom man; the word shalom daily on his tongue. Nelson asked Noel how can we be certain that Jesus is risen? “Noel responded, “It’s a living relationship with Jesus that builds assurance. . . . What God wants is relationship, and in Jesus such a relationship is possible in a new way.”

A shalom pilgrim for me was great-aunt Mary Baechler. She was one among many of her generation who sought the well-being of family, church and community. Mary embodied the Hebrew meaning of shalom/peace that Nelson described as “a general condition of well-being, plenty, security, justice, and belonging. Above all, shalom has to do with relationships: being in harmony with our Creator, relating wisely to the physical world, and building bridges of mutual respect with other people.”

Mary and my maternal grandmother, Katie, were sisters. Their father was ill and money was limited in the young family of four children.  My grandmother had to go live with other relatives during the week and come home on weekends. I wanted to know more about their childhood and so in 1980 I wrote to Mary with a bunch of questions. Glory be, I still have the letter she wrote back. I share most of it here, with only minor omissions and edits. I do not know at the moment when God claimed Mary for his own, but she and a host of shalom pilgrims, in faithfulness, brought God’s light to the world, a world where we belong right now and a Kingdom we move toward for eternity. Mary’s letter:

Greetings. Well you must have thought I did not want to write to you but after your welcome letter came I was in hospital for quite a long time and then I wanted to wait till your mother comes and last Sunday I decided to go at it alone and before I had a start here comes Lloyd and Leona and we talked a little and there were more visitors. Then it was time to go home again and no start. So I will see what I can do.

I really don’t know what is so interesting to you. A lot of our childish pranks have long been forgotten but still come to my feeble mind, like going fishing. She [Katie] enjoyed that so much and I was happy to go along but she had to bait the hook for me and if I was lucky to catch one she had to take the fish off for me. And she’d tell stories at bedtime like when she went to school she would tell us who sat with who. It was interesting even when I didn’t know who was who.

One I remember when dogs got into Uncle John’s sheepfold and killed some sheep. She was sent to the neighbors to tell them about it and they said it couldn’t have been their dog. He was a very vicious dog and the lady said they were afraid to touch him. So my sister walked over to the dog and opened its mouth and it was full of sheep wool. She was not bitten.

Also when we grew up what she said was nearly always OK with me. There is a song that we often sang together. I don’t know anymore where we got it but I still often sing it to myself [words at end of letter].

When lunch time came around when she was with us it was always apple butter sandwiches. Ordinarily I did not care for apple butter but because she liked it so much I thought it was not so bad. There was a set time when everybody had to be in bed. When she was with us we never got tired so we took everything we needed up to our room and the three sisters had so much fun we had to stick our nose into the feather tick so nobody could hear us laugh. Those were the carefree days.

We were so busy doing things we had not much time to read and there were not many books available but most of the memory work we had in school stayed with me, even in my old, old days. We had no record player, no radio and even no phone but nevertheless we were happy and enjoyed each other. She often wished it would be possible to stay at home and live with us and I certainly wished it too.

She was a good seamstress, always better than I, but when it came to knitting I could outdo her as mother and I were knitting I think for the whole family when other girls did fancy work. We loved school, each in our own school. When I started school I did not have my sister to tell me how much I should tell so when teacher asked me what do you want to be when you get big I said a farmer’s wife. And that is all I ever was.

There were sometimes questions about the church but what our uncle (the Bishop) said we done it and if we did not understand it at the time it all worked out for us. The clothes were supposed to be plain but some could hide some pride underneath the cape. That was very handy for most of us.

When I finally got married it was very hard to leave home as my father was sick and mother had a hard time. I often stayed with mother as she needed me. She died at our house at age of 65. Now as I sit at the window looking out I often wonder why I was spared. I am now over 85, so much older than my mother and my sister. It leaves a question mark.

Now about home life. Our daily work was carrying wood, milking cows, baking bread, coffee cake, pies, cookies. We made our own butter and cheese, so we always had something to do, but no pay cheques like you get. We also had to carry water to the house. There were no bathrooms, just outhouses with Eatons catalogues. The catalogue was not used too much in the winter. It was too cold. The bedrooms were very cold so we grabbed our clothes and came down and dressed by the stove. But we were contented. I guess we didn’t know any better.

Your grandmother’s best friends were Lydia Zehr, Susie Brenneman and a lot of people I can’t think of at the moment. The biggest and most wonderful games we played were Parcheesi, Fig Mill, and also cats and pump-pump-pull-away. All these things will seem silly to you but we were satisfied. . . .

Your Mother and Dad had dinner with me today at The Maples. So Good Bye for now and would enjoy more letters from you. [end of letter, words of song follow]

“Through the valley of the shadow I must go. / Where the cold waves of Jordan roll / But the promise of my shepherd will I know. / Be the rod and the staff to my soul / Even now down the valley as I go / I can hear my savior say follow me / and with him I’m not afraid to cross the tide / there’s a light in the valley for me.

2.  “Now the rolling of the billows I can hear / as they beat on the turf bound shore / But the beacon light of love so bright and clear / guides my bark frail and lone safely o’er / I shall find down the valley no alarm / While my saviors blessed smile I can see / He will bear me in his loving mighty arm / There’s a light in the valley for me.”

To end, this after-communion prayer speaks for Mary, Katie, our parents, you:

Lord Jesus Christ, we thank you that in this wonderful sacrament you have given us the memorial of your passion; grant us so to reverence the sacred mysteries of your body and blood that we may within ourselves and show forth in our lives the fruit of your redemption, for you re alive and reign, now and forever. Amen.